~~~COVER REVEAL~~~ KILL FOR AN AUTOGRAPH by T. L. Sullivan 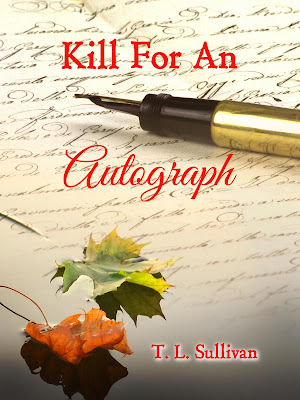 Tabitha Lawrence, plain Jane by day, sexual adventuress by night.
Garrett Silver, the Adonis of the Twenty-First century, centerfold to the literary community.
Tabitha attends the largest book signing in the nation, where she meets Garrett Silver, the man of her dreams.
When her two worlds collide, will the chemistry fuse them together or will they meet their demise by the one who would kill for an autograph?


About The Author:
T. L. Sullivan resides with her family in Central Florida where she has traded the big city life for a twenty acre farm. An avid animal lover, you will find her when she is not writing in the pasture with her dogs and miniature Zebus. After several years of writing sports articles for the local newspaper, she penned her first novel.


Posted by Little Red's Book Reviews at 9:00 AM No comments: