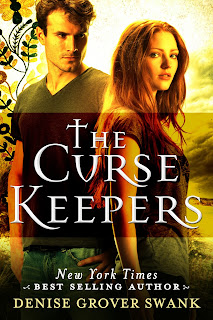 The wall between our world and that of vengeful spirits has protected humanity for more than 400 years. It’s about to come crashing down. Ellie Lancaster has lived her whole life by the site of the mysterious Lost Colony of Roanoke, the Virginia settlement that vanished without a trace around 1590. Only the descendants of the two men who banished the spirits of an enemy tribe from the material realm know what really happened to the colony. Ellie is one of those descendants—a Curse Keeper. Her father took pains to teach her what he knew of the curse and the responsibilities of its guardians. He taught her that if the two Curse Keepers ever meet, the curse will be lifted, the gate will open, and the raging Native American spirits will be unleashed to seek their revenge. Despite her father’s seriousness, Ellie has always taken the legend for a harmless fairy tale. Until she meets the darkly handsome, but downright infuriating, Collin Dailey and realizes everything she was told is true. For when they meet, it’s like the air is sucked from the room. Collin’s presence is electrifying… and it’s not just attraction Ellie feels, but the inexorable pull toward her destiny. The prophecy is real, and now Ellie and Collin must battle supernatural forces and their loathing—and passion—for each other to set things right. The Curse Keepers are all that stand between the world and its destruction.

Posted by Little Red's Book Reviews at 6:45 PM No comments: 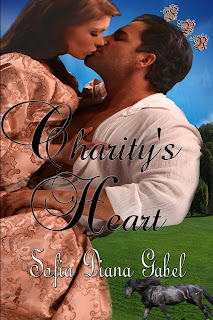 I received this book as a gift for a honest review. 5 star rating isn't enough stars for this book. This book was an absolute page turner. The more and more I got into the book the harder it was to put the book down. Sofia Diana Gabel really knows how to capture your attention and pull you in. I felt so part of the book that when Charity when through pain I just wanted to jump into the book and smack them. I wanted to help defend her. Especially against Mathias when he tells Charity what he was going to do and how he was going to treat her when she became his wife. Charity a 19 year old had her husband all picked out for her from her father. Being a young girl she wants to explore the world and see what is out there and fall in love herself NOT have someone chosen for her. Lillian her best friend is having a part at which Charity learns about a gentleman going to announce his engagement to Charity. When Charity finds out she wants to run away. Lillian has a secret love who her parents wouldn't approve of cause he isn't in the "society" status. Charity learns that Hiram's (Lillian's Love) mother was murdered. The man accused of her murder is the father of the man Charity is falling for Alexander Sutton. Alexander is a detective who wants to find the person who killed Hiram's mother and clear his father's name once and for all. With Lillian and Charity being from upper class they had hired help. Well Rowan Lillian's groundsman wasn't as great as he seemed. With striking Charity and threats to her really shows a different side of him. He had many hidden secrets that just start to unravel. I really enjoyed reading about Charity being rebellious and learning what the real world is like. While Charity is trying to get home after she ran away she runs into a rain storm and decides to stop at a house to rest. She meets this very nice elderly lady who might have been blind but could "see" pain Charity's heart was having. I just have to say this I can't say too much more about it cause I could tell you the whole book and it would just ruin your fun of reading it. Just know I really enjoyed it and haven't read a romance novel like this in awhile.
Posted by Little Red's Book Reviews at 9:56 AM No comments: